not all who wander are lost.

After starting classes at the Iron Yard, I’ve (for the first time in a long time) wanted to spend more time on my computer outside of the 9 – 5 doing programming things. Unfortunately, this has eaten into the time I normally spend after work shopping for groceries and making dinners. Luckily, my friend recommended Blue Apron which I had just started prior to class. The service sends you ingredients and recipes for three dinners per week for 2 or 4 people. The send everything but the oil, salt, and pepper! We have the 2 person plan and it works out to 2-4 servings / meal (depending on how hungry you are or if you choose to supplement with a salad). Using the service has allowed me to make dinner with the hubster in < 60 minutes without having to go to the store. No two recipes are repeated in the year which speaks to my irrational ‘I don’t like to eat the same thing twice’ philosophy and they have sent us a few things I have never heard of before. Hubby and I are in love with the food!

We have decided to take a break from the service for a few weeks to make stuff we miss from our normal repertoire. I will definitely be posting recipes and pictures from the upcoming adventures from our menu this week which includes: Coconut braised chicken with chorizo and potatoes (Food & Wine), Spicy mustard greens and pork soup (Epicurious), Fingerling potato and kale hash with egg and cheddar (Blue Apron), and homemade Pork and cilantro dumplings (mix of a few recipes)

As a bonus here is a fried chicken recipe we attempted last weekend:

The recipe was unbelievably juicy and the rosemary flavor really came through well. Keeping the frying oil at the proper temp was very hard and as a result some pieces came out with more browned crust than others. Overall this was worth the extra brining time and we will be making it again! 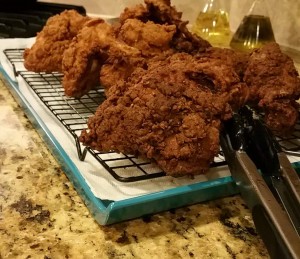 You May Also Enjoy

My friend recorded our We Rise in Tech Conference presentations and I wanted to get them up online. I had the idea to also put our slides in the video and fi...

Hubby and I are making dumplings again, every Sunday if we can manage it. It’s been a nice adventure to learn about his culture while exploring ways to inco...

I’ve been using postman for awhile now, and I found some amazing features during the last project I worked on. I think they are worthy enough to share, so h...

hackathon firsts but not lasts